How strong are your hamstrings?

Let’s dive into some anatomy and find out! 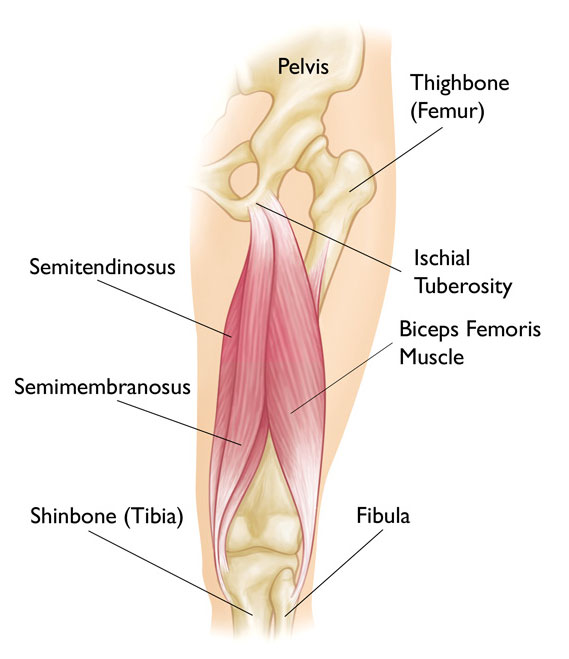 The hamstrings are comprised of 3 major muscles – the biceps femoris, semitendinosus, semimembranosus. All 3 originate from the ischial tuberosity and inserts past the knee joint onto the lateral head of the fibula, medial surface of tibia and medial tibial condyle respectively. The hamstrings are two-joint muscles, meaning that they are very effective at both knee flexion and hip extension. Besides playing a key role in the movements mentioned, they also function as a major stabilizer for the knee joint via co-contraction during movement, making them a muscle group not to be missed if your goal is to maintain healthy knees and reduce injury risk while getting stronger.

I squat 3-4 times per week, wouldn’t that give me strong hamstrings?

Multiple studies suggest that squatting alone doesn’t build very strong hamstrings - as it is a quadricep and glute dominant movement. A proposed reason for that being that the nervous system tends to utilize single-joint muscles before two-joint muscles to create more efficient movement. Sure, your hamstrings will get stronger over time with squatting, but it will most likely be left behind in terms of strength gains compared to your quads and glutes. There are better, more effective and efficient ways to get the hamstring stronger.

A study by Bryanton (2015) showed that in a squat, the hamstrings do what they must to stabilize the knee and coordinate movement, activity level only goes up to add additional hip extension torque that the glutes can’t handle. In simple terms, if the glutes can’t handle the work, the hamstrings come in to help finish off the movement of hip extension. It would make sense why it is not uncommon for many lifters to develop sensitivity and pain in their hamstring region (i.e tendinopathy) especially in higher loading phases when glutes fatigue early and the hamstrings just doesn’t have the capacity to keep up with the loading (especially if you’re a conventional deadlifter).

If that sounds like you, a good solution would be to first prioritize increasing glute strength and endurance while working on hamstring development with the goal of increasing the loading capacity and threshold so that when the glutes are fatigued, your hamstrings will be able to handle much more prior to getting overloaded.

The deadlift, especially the conventional deadlift is a great posterior-chain dominant movement and hamstring builders. However, the hamstrings work more as a hip extensors rather than knee flexors. Which brings me to my point of the importance of including isolated knee flexion hamstring work in training.

A study by Brad Schoenfeld & Bret Contreras looking at regional differences in muscle activation during hamstring exercises showed that a lying leg curl yielded the strongest response in the hamstrings compared to the stiff legged deadlifts. So what does that tell us? Does that mean you should just stop deadlifting and do hamstring curls all day? Absolutely not. You should be doing both compound posterior-chain dominant work PLUS isolated knee-flexion work to get the most out of your hamstrings and decrease the risk of a developing any overuse injuries.

It is worth mentioning that having weaker hamstrings compared to your quads and glutes are not at all correlated to having painful knees, hamstring or tendon pain, many can get away with training and playing sport without doing much hamstring work and still have no pain vice-versa. However, from a performance and injury-risk reduction stand-point, including specific hamstring work to increase the load tolerance of your hamstrings will certainly be beneficial.

How do I test my hamstring strength?

There are a number of ways to test your hamstring strength but one that is the most easily accessible for most is the single leg hamstring bridge test (SLHB).

A study by Grant Freckleton, Jill cook & Tania Pizzari looking at the predictive validity of the single leg bridge test for hamstring injuries in AFL players showed that if you can’t complete more than 20 reps of the SLHB (plus having a past history of knee injuries and prior hamstring injury being the best predictor for future injury), you are at an increased risk of a future hamstring injury.

Although that study was looking at a totally different sporting population (field-based athlete vs strength-based athlete), it is still a great way to track progress & improvement by finding your baseline number of repetitions and re-assess in 8-12 weeks after a block of prioritizing hamstring work.

Askling (2013) compared the effectiveness of two acute hamstring rehab protocols (lengthening-emphasis vs conventional rehab) and found that the group that included lengthening-type exercises was more effective in promoting return to sport (shorter return to sport time) due to it’s ability to place high loads at long muscle-tendon lengths – building tolerance and resiliency at the end ranges of the muscle-tendon unit.

Hopefully by now you would've given the test a go and found out what your baseline level is. Without further ado, here are a few great eccentric-biased (and one isometric) exercises that you can easily fit into your weekly training program. Generally for most, performing 3-4 challenging sets per exercise, 1-2 exercises per session, twice a week would be a good starting point. Let me know how you go with them. All the best!

Note: I would recommend most people to stabilize with one hand gently so that you don't have to worry about balancing. Our goal here is to strengthen the posterior chain & hamstring, not to improve balance. By stabilizing with one hand, it'll allow you to load up more effectively.